Apersonal perspective from an ADFORS participant

When I first applied (and was accepted) earlier this year for participation in Saint-Gobain’s bike ride from London to Blois in celebration of our Group’s 350th anniversary, I felt privileged to be accepted to participate and immediately targeted it to help me fulfil several aims & objectives …

Little did I realize at the time how well ALL of these 5 objectives would be fulfilled!!

After an early rise at 0430hrs & the forcing down of a pot of porridge and the contents of a breakfast box, I set off on my walk to Crystal Palace with bike and holdall arriving in good time for the 0600hrs registration process. After a few group photos and some words of thanks and encouragement from Peter Hindle and a representative of our official charity partner Macmillan Cancer Support, we were duly introduced to Skyline Event Management who would be our support crew for the duration of the ride. It was then with a mix of excitement, anticipation, trepidation & nervousness we paraded out of the grounds of Crystal Palace Sports Centre on our bikes and, clad proudly in our 350 cycling jerseys, hit the roads of London and Kent en route to Dover. 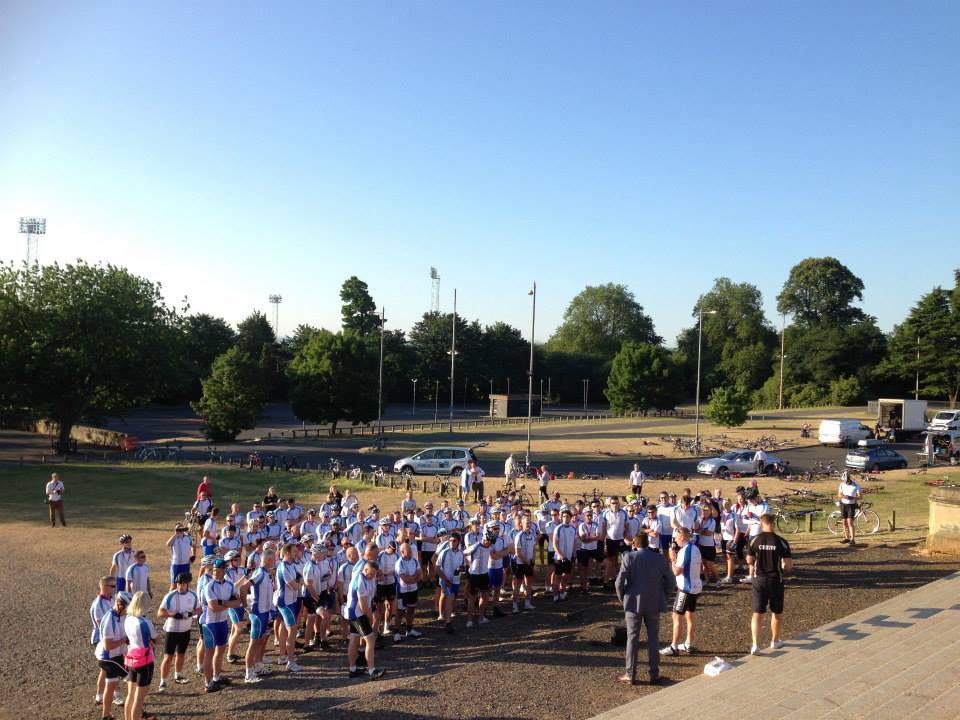 It wasn’t long before the bustle of urban London started to give way to the more sedate scenery of Kent and as we crossed over the M25 motorway, this signalled to me that we were truly leaving the capital city behind.  It was roughly at this point I found myself riding alone for a spell and was treated to a ‘personal’ flypast of the Red Arrows who thundered overhead in arrow formation; presumably on a training exercise. However, it was a different kind of orange arrow that were to become the stuff of my dreams (and nightmares) over the next few days as they marked our long road to Blois.

As we left the White Cliffs of Dover behind and our bikes safely stowed below deck, we took advantage of the Channel crossing to sit on a comfy seat & enjoy our first meal and chat together as a Saint-Gobain cycling team.

The crossing seemed to pass quite quickly and we were soon back below deck collecting our bikes and donning our high-viz and lights before disembarking from the ferry and proceeding – again in convoy – through the streets of Calais to our respective hotels for the night. With a long, tiring day under our belt we went to bed with much anticipation about getting our teeth (or should I say tyre tread) stuck into some smooth French tarmac the next morning.

Our first full day of cycling on French soil (and my donning of an ADFORS jersey) started with a bit of a rude awakening for me and my room-mate Adam Wyre (Gibbs & Dandy) when our alarm clock sounded at 0600hrs.

However it soon became apparent that something was amiss when we went down for breakfast and found ourselves the only ones present in the restaurant area. It soon dawned on us whilst watching the TV in the background that Adam’s phone had not correctly adjusted to French time and that we had got up 1 hour earlier than intended. Nonetheless a relaxed morning breakfast was duly downed as our fuel foundation for the day.

The pace of our small group out of Calais was very brisk and by about mile 10 I was having difficulty sustaining this, especially on some of the uphill gradients. I therefore took the decision to ease off the gas for fear of jeopardizing my energy levels later in the day or ride. This ultimately proved to be a good decision as our journey turned into a fabulous, sun-kissed and exhausting day of undulating French countryside

I don’t know if it was adrenalin or the anticipation of the prospect of yet more pain in the proverbial / perineum but I was wide awake in Amiens at 0430hrs and already bracing myself for allegedly our hardest day in the saddle yet.

It was clear however that by now a few riders were already starting to suffer from a range of ailments & fatigue but were still admirably & willingly soldiering on. As for me, Day 3 became dubbed “Double Shorts Day” – my vain attempt at alleviating some saddle soreness that had been making its presence felt and which can easily develop into a cyclist’s worst nightmare.

There was clearly an air of trepidation in some quarters as we riders stared blankly into our muesli at breakfast thinking about the rigours of the day ahead. As we descended the steps of the hotels many seemed to agree that starting Day 3 was the toughest mental hurdle of our ride and one that had to be surmounted.

Today was a day for donning my 350 jersey and Saint-Gobain bib shorts as our final day consisted of a 125 mile ride to the location of the Saint-Gobain Archives in Blois – an appropriate setting chosen for the arrival of our cycling group given the history of Saint-Gobain’s 350 years. Though this was the longest mileage we would cover in one day on our ride, the hill profile was (supposed) to be less taxing than previous days. In reality however it soon became apparent to many of us that this wasn’t really going to be the case as strong, energy-sapping headwinds / crosswinds swept across huge endless expanses of open fields with only the occasional cute village offering a degree of respite and shelter.

By mile 57 I found myself absolutely ‘cream-crackered’, empty and spent and at this point I was seriously questioning my ability to summon the will & strength to complete the challenge/distance. I felt utterly drained but with the support of my Warrington compatriot Karl Smith (CTD) and a life-saving fix of energy gel and some stiff mental self-talk reminding myself of one of the reasons I had opted to embark on this adventure in the first place (Macmillan Cancer Support), I did finally manage to pull myself together and rotate my wheels to the finishing line in Blois after 9 hours, 25 minutes of pedalling and heart-searching that day. 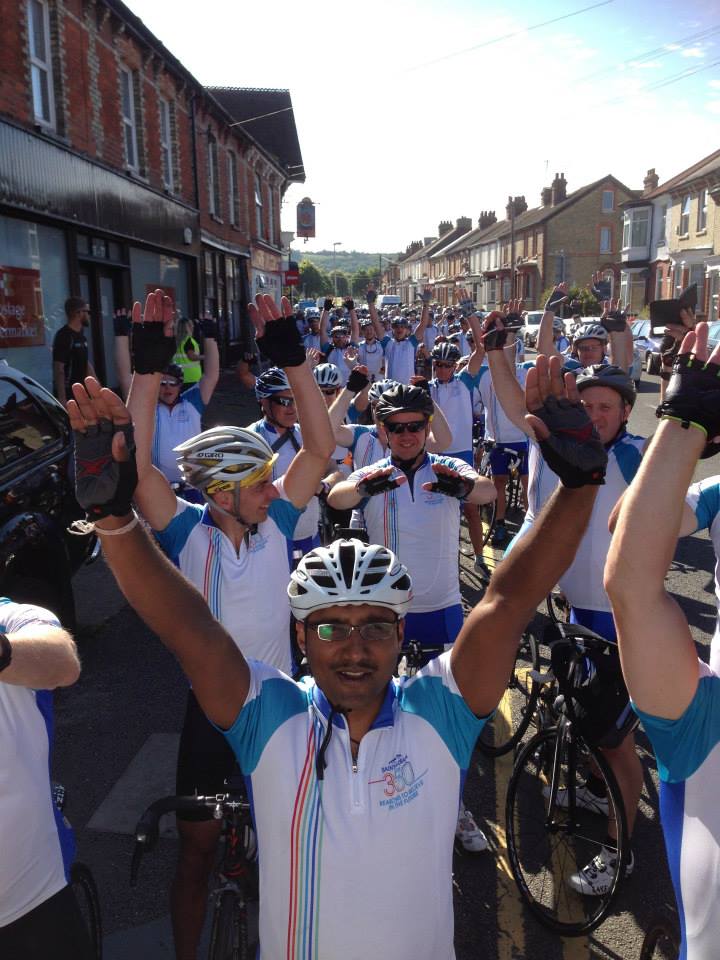 I don’t wish to overplay my emotions and I felt I coped okay with days 1-3 , but I have to honestly admit there were moments in Day 4 when I had to dig deeper than I have ever done for anything before in my whole life. I am not ashamed to admit that I did also shed a few private tears during the final few miles as I think a combination of sheer fatigue, relief and emotion caused me to remember my own Dad who benefited from the support of Macmillan during the twilight days of his life.

I will be eternally grateful to Saint-Gobain Adfors for allowing me to represent a company which is very dear to my heart in this way. I have always loved cycling but since acquiring a road bike in January 2014 for my 50th birthday I have really embraced this sport in order to keep fit & healthy and whilst not claiming to be any kind of Wiggins, Froome or Cavendish (and a tad cack-handed at dealing with punctures and the mechanical side of the sport) the day I am no longer able to ride my bike will be the day that I die…

Anyhow, if you have been inspired by my efforts and feel able to donate to our special cause you can still visit my fundraising page www.justgiving.com/MartynJones350 and give whatever you can in support of this wonderful charity that does important & amazing work. As I write I see our online fundraising total stands in excess of an incredible £100,000; a figure which exceeds our already ambitious target of £75,000 by quite some margin. Well done to everyone who has fundraised or donated to achieve this….it’s a remarkable achievement and makes me really proud to work for Saint-Gobain.